In the first completely instructional book ever written on chess openings, National Master and game strategist for Netflix’s The Queen’s Gambit Bruce Pandolfini teaches players how to take charge of the game's crucial opening phase.

Of the three traditional phases of chess play—the opening, the middle-game and the endgame—the opening is the phase average players confront most often. Unfortunately, though, many openings are not completed successfully, partly because until now most opening instruction has consisted of tables of tournament level moves that offer no explanations for the reasons behind them. Consequently, these classical opening patterns can serve as little more than references to the average player.

In Chess Openings: Traps and Zaps, Bruce Pandolfini uses his unique "crime and punishment" approach to provide all the previously missing explanation, instruction, practical analyses, and much, much more. The book consists of 202 short "openers" typical of average players, arranged according to the classical opening variations and by level of difficulty. Each example includes:
-the name of the overriding tactic
-the name of the opening
-a scenario that sets up the tactic to be learned
-an interpretation that explains why the loser went wrong, how he could have avoided the trap, and what he should have done instead
-a review of important principles and useful guidelines to reinforce each lesson

Also included are a glossary of openings that lists all the classical "textbook" variations for comparison and reference and a tactical index. Chess Openings: Traps and Zaps is a powerful, pragmatic entry into a heretofore remote area of chess theory that will have a profound influence on every player's game. 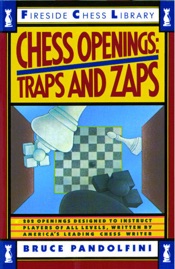