Bogamus was having a bad day. The three billy goats Gruff had sneaked, tricked and finally buffeted him off his bridge. Now he was flying through the air, arms flailing and screaming. His bridge, the river under it and the valley it ran through were all getting smaller and smaller beneath him.

But a prang from a billy goat's horn was not the end for Bogamus, who found himself floating along the river. Why not follow Bogamus as he travels along the river and has adventures with heroic knights (well ... fairly heroic), terrifying giants, (un)distressed damsels, beautiful princesses, dainty fairies and wicked enchanters. A journey that will eventually lead him to the real world where he makes new friends and faces new challenges.

Bogamus the Troll is a funny, silly yet charming story about an unfortunate but likeable troll for children aged 7 to 12. The story is split into ten short chapters each of which can be read in about thirty minutes. 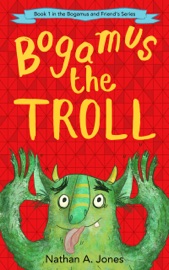