Who’s Your Man of the Month?

When a group of fiercely determined friends realize their beloved hang-out is in danger of closing, they take matters into their own hands to bring back customers lost to a competing bar. Fighting fire with a heat of their own, they double down with the broad shoulders, six-pack abs, and bare chests of dozens of hot, local guys who they cajole, prod, and coerce into auditioning for a Man of the Month calendar.

This collection contains the first three books in the series.

Certified bachelor Reece Walker wants two things — to save the local bar he manages and to get Jenna Montgomery into his bed.

He has a few ideas for the bar. But Jenna... well, he’s going to have to rely on cold showers, because she’s been his best friend for years, and that’s a line he just can’t cross.

Until one wild kiss on a dark night changes everything. Now Reece is certain Jenna’s meant to be his.

And with long nights in bed, sensual caresses, and deep, lingering kisses, he sets out to thoroughly convince her that friends can be lovers, too.

A hard body. A dangerous past.
Meet Mr. February.  Sometimes, revenge is sweet.

A former reality-TV star, remodeling expert Spencer Dean doesn’t trust women. Not after his fiancée, Brooke, left him at the altar five years ago, breaking his heart and hardening his soul.

Now, Brooke is close to a deal for her own show that will launch with the remodel of a popular Austin bar. The problem? The network insists that Spencer step in as her partner.

He’s tried to forget her—but he can’t deny that he still wants her. More than that, he wants to punish her. And so he agrees, but only on terms that are provocative, demanding, and wildly sensual.

It’s the perfect set-up for extracting revenge. But he doesn’t expect to fall for Brooke all over again…

With his tousled hair, cocky grin, and surprising abs hidden under a conservative button-down, bartender Cameron Reed is no stranger to the attention of women.

He dates, but never gets serious, claiming that he’s too focused on his studies. But it’s not really school that preoccupies him; it’s sensual fantasies of his best friend’s sister.

Mina Silver might be absolutely off-limits because of her overprotective brother and father, but that doesn’t stop Cam from imagining the feel of her in his arms, the brush of his lips over her soft skin, or the sparks that would fly between them if he ever got her into bed.

But for Cam, the bonds of family and friendship are sacrosanct, and there is no way that he’d ever violate his friend’s trust. Or would he?

Because with love on the line, maybe it’s time for Cam to break a few rules.

Each book is a STANDALONE romance with an HEA and an overarching story about a group of friends and the local bar they love. Totally hot and utterly binge-worthy! 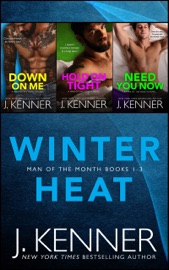 Comments
Free read eBooks online from Winter Heat. Review Winter Heat for free and without need to Registration. Read Winter Heat PDF/e-Pub/kindle fire on your devices without any apps or contracts.