THE history of Spain offers us a melancholy contrast. Twelve hundred years ago, Tarik the Moor added the land of the Visigoths to the long catalogue of kingdoms subdued by the Moslems. For nearly eight centuries, under her Mohammedan rulers, Spain set to all Europe a shining example of a civilized and enlightened State. Her fertile provinces, rendered doubly prolific by the industry and engineering skill of her conquerors, bore fruit an hundredfold. Cities innumerable sprang up in the rich valleys of the Guadalquivir and the Guadiana, whose names, and names only, still commemorate the vanished glories of their past. Art, literature, and science prospered, as they then prospered nowhere else in Europe. Students flocked from France and Germany and England to drink from the fountain of learning which flowed only in the cities of the Moors. The surgeons and doctors of Andalusia were in the van of science: women were encouraged to devote themselves to serious study, and the lady doctor was not unknown among the people of Cordova. Mathematics, astronomy and botany, history, philosophy and jurisprudence were to be mastered in Spain, and Spain alone. The practical work of the field, the scientific methods of irrigation, the arts of fortification and shipbuilding, the highest and most elaborate products of the loom, the graver and the hammer, the potter's wheel and the mason's trowel, were brought to perfection by the Spanish Moors. In the practice of war no less than in the arts of peace they long stood supreme. Their fleets disputed the command of the Mediterranean with the Fatimites, while their armies carried fire and sword through the Christian marches. The Cid himself, the national hero, long fought on the Moorish side, and in all save education was more than half a Moor. Whatsoever makes a kingdom great and prosperous, whatsoever tends to refinement and civilization, was found in Moslem Spain. 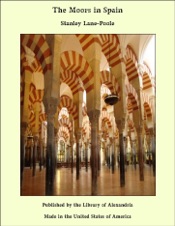